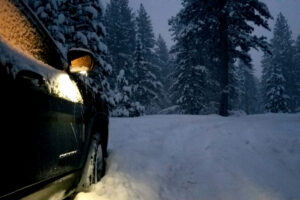 Steeped in the history of the old west, Henness Pass Road provides a more scenic and relaxed route through the Sierra Nevada Mountains.  Originally the indigenous tribes of North America used this as a major trade route.  This secluded and winding mountain road extends for over 100 miles.  It travels through scenic mountain passes and vistas. A lot of it is recommended for high clearance, four-wheel drive vehicles. In addition to the scenic views, travelers will find waterfalls, rustic inns such as the Mountain House Stage Stop and Inn, abandoned mining camps, abandoned mines and numerous historic sites from the Gold Rush. 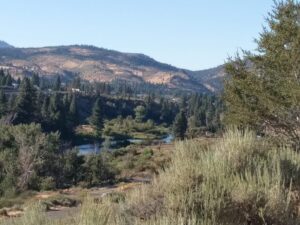 Henness Pass Road was the primary emigrant trail from Virginia City, Nevada as early as 1849 and the only mountain pass that existed at the time. During the Gold Rush, this often forgotten highway served as a supply road for the Comstock silver mines in Nevada. In 1852, Henness Pass Road was a wagon toll road from Nevada to the gold field of California. Between 1860 and 1868, traffic was so heavy at times, that freight wagons had to travel by day and stagecoaches drove at night. Once the transcontinental railway was completed in 1868, the road was abandoned. Fortunately the road is still there and has been left to the more adventures among us.

Henness Pass Road passes Sardine House and a 1,500 acre ranch that once stood in Sardine Valley. Weber Falls is at the top of a 25 foot pool that plunges into a waterfall of nearly 80 feet. Jackson Meadows Reservoir marks the halfway point. Henness Pass Road traverses the Middle Fork of the Yuba River, travels along the open pine forests and meadows above the Little Truckee River. In many places, the creeks wash over the road.  This pass is the lowest pass through the Sierra.

From the East the road begins in Verdi Nevada, Old Dog Valley Road. then travels West over Henness Pass then drops down to the Middle fork of the Yuba River.  The road terminates at Camptonville California on highway 49.

Ladybug Peak in the Verdi range, California at  8,380′ is one of the two tallest peaks in the Verdi range. They are located  just across the Nevada/California border west of Verdi, Nevada. This range is desert like on the east side, and forested on the west side. And is an example of how the mountain ranges in this area act as a rain shadow. Views east reveal a desert landscape, and views west show a forested landscape.

The Verdi Range, which covers about 12 miles north-south. It’s southern terminus is at I-80, it’s northern terminus at Henness Pass. The range is just north of the Carson Range, and is part of the northern Sierra Nevada Mountains. Not as tall as their southern counterparts, this range still rises up precipitously from the valley floor.

The two summits are located about a mile from each other and share a saddle at about 8,055′. They are both reached from the same approaches. These primary approaches are from the north side or northwest side near the Stampede Reservoir. Roads lead up to just below the summit of Verdi Peak, and within 250 yards of the summit of Ladybug Peak. So, a 4WD can get you really close to these summits. Without 4WD, the closest you can get is a little under 5 1/2 miles from Verdi Peak.

There is temptation to approach Verdi and Ladybug Peaks from the east side. Especially for those living in the Truckee Meadows area. Verdi is nearly 30 minutes closer to Reno/Sparks than the Stampede Reservoir. And there is a way to reach these peaks from the east, without crossing private lands, or at least without crossing lands with restricted access. However, to do so is brutally tough due to the thick brush and rocky four wheel drive roads on the east side. Because of the very steep, trail-less, route-less, eastern approach hiking it is not recommended. Although, in winter, it would be interesting to try this with snowshoes.

These peaks can be climbed year-round. Although typically they are snow covered from late-November through late-April-mid-May. The road to Stampede is closed if snow conditions warrant. Views are excellent, with mountains on all sides. Fall is probably the best time to hike here, or late spring if snow levels are adequately low.

Here are some interesting links to the Verdi Range